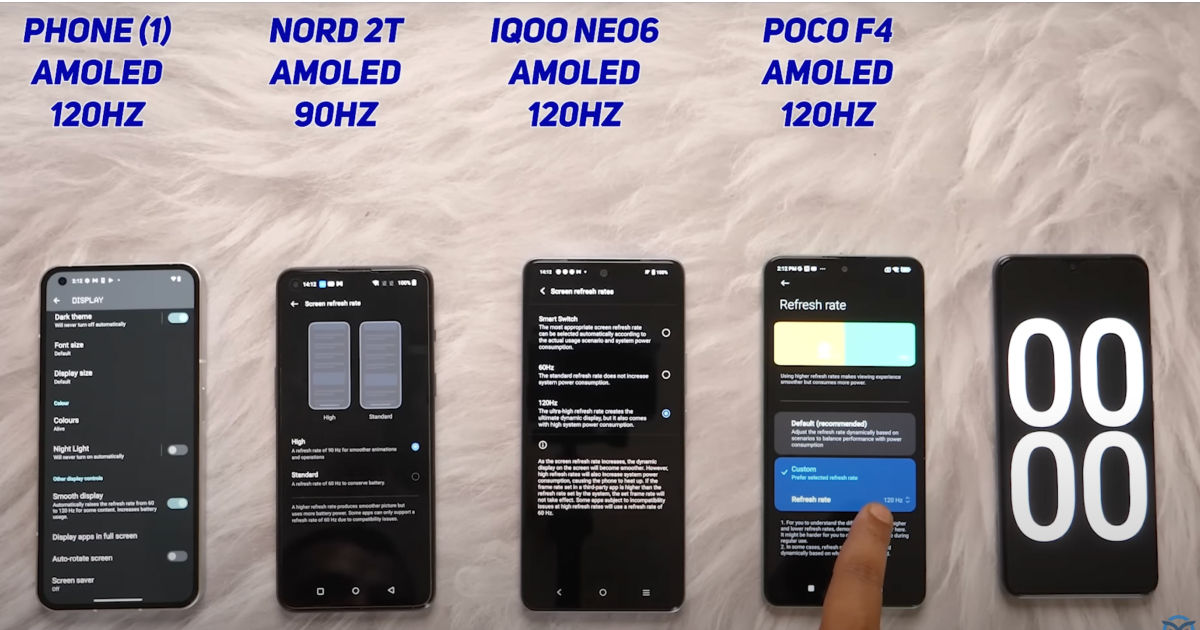 The mid-range smartphone market has matured quite a bit, and this month, we have several new and interesting devices worth. The Nothing Phone (1) is one such interesting phone that offers a unique transparent rear panel with LED lights. We recently reviewed Nothing Phone (1) and had mixed opinions about it. You can read our full review here. Meanwhile, the folks at MySmartPrice took the Nothing Phone (1) for a battery drain test alongside the OnePlus Nord 2T, iQOO Neo 6, and POCO F4.

The tests were conducted at the maximum possible levels of standardisation to minimise the chances of errors on the devices. The display was kept at full brightness. It is also good to keep in mind that the Nothing Phone (1), Oneplus Nord 2T, iQOO Neo 6, and POCO F4 get 4,500mAh, 4,500mAh, 4,700mAh, and 4,500mAh batteries, respectively.

The first was a video playback test for a total duration of two hours. The test taxed the Nothing Phone (1) the most, which dropped from its 100 percent charge level to 79 percent. All others held a decent 80+ percent charge, with the iQOO Neo 6 holding up the strongest with 89 percent charge left.

The next test checked out the performance on the devices, and a round of Geekbench, AnTuTu, and a CPU throttling test. This test strained the POCO F4 the most, which dropped down to 57 percent of battery juice, while the iQOO Neo 6 maintained the lead with 65 percent power left in its battery pack. The performance test made way for a quick round of gaming, and here the Nothing Phone (1) grabbed the lead while the POCO F4 trailed at the last position.

Once all phones went down, MSP conducted a charging test. The Nothing Phone (1) is the slowest to charge at 33W. The POCO F4 is next with 67W charging support, while the OnePlus Nord 2T and iQOO Neo 6 both charge at 80W speeds.

The Nord 2T charges the quickest and takes just 32 mins to full charge from 0 percent. Understandably, the slowest of the lot is the Nothing Phone (1) which took 1 hour and 17 minutes to charge.